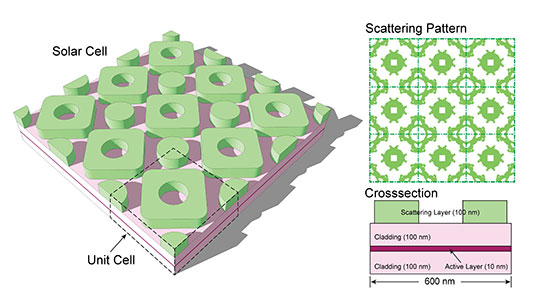 The energy potential of the Sun is known to all and it is also a well known factor that this energy can be exploit to  certain limitations owing to the expenses require to be incurred. Taking electricity through silicon solar cells is really very expensive and one could get the estimate by knowing that one require to spend 10 times more than the money spent on coal energy. In the developing countries the idea still seems to be a matter of dreams. However, the richest of nations are still spending on it.

At present, the polymer solar cells are used to harness electricity from solar energy, which use the organic materials for absorbing light and then transform it into light. However, according to the scientists these current properties to generate electricity are not very efficient and up to the mark.

What new research says:-In a new research by scientists at Northwestern University, researchers have attempted efforts to increase the efficiency of this polymer layer, which is based on mathematical search algorithm based on evolution. In this experiment scientists have tried to design the pattern of this layer in a geometrical way, in order to increase the time for which light remains to be within the cell.

In this algorithm based method, light is made to enter a geometrically patterned scattering layer , which is 100 nanometer thick. This dielectric layer is designed in order to increase the light transmitted into the cell, after this front layer, light enters the active layer which converts it into electricity.

This new discovery has challenged to the yablonovitch limit, which is a thermodynamic limit to describe the duration for which a photon can be held in a semiconductor. This pattern was developed in the year 1980 and since then has been followed worldwide for converting solar engery intoelectricity.

According to Cheng Sun, Assistant Professor of Mechanical Engineering at Northwestern University, the researchers wanted to establish the geometrical pattern in order to get the maximum holding time for light and thus, took the guidance from laws of natural selection. Cheng Sun has also co-authored this research paper.

This research paper  under the name of “Highly Efficient Light- Trapping Structure Design Inspired by Natural Evolution” was published on January 3 in the Journal called Scientific Reports, which is a publication of Nature.
According to Wei Chen, Wilson-Cook Professor in Engineering Design and Mechanical Engineering Professor at McCormick, the research included evolutionary principals of crossover and genetic mutation. She also said that this process works on the biologically process of evolution, which is survival of the fittest and required an appropriate approach because of the non-linear and irregular behaviour of the systems.

This new pattern of light scattering layer could prove to be a less expensive method of harnessing electricity from solar energy. Researchers have not increased the thickness of the polymer layer, rather looked for other possibilities which involved mathematical search algorithm based on natural evolution procedures. Initially the scientists had made efforts with several other design patterns of the layers, which could enhance the light trapping performances and finally after over 20 generations experiments they reached this form of evolutionary process.

Gardens on the move – Checkout some...

Lavoro: Mobile workstation to work on your...