Want to explore something that no human has ever explored? From the Atacama Desert to Mount Everest, we have explored pretty much everything that stays on land. However, when it comes to oceans, it is totally different. Not only oceans cover three-fourths of our planet, in addition, they are also extraordinarily deep. Marine Trench is just one in a million, there’s much more to the oceanic beauty. Therefore, it is no wonder that we known only about 1% of them. Nevertheless, you can’t just simply dive into the ocean to explore its depths. You need assistance. Gadgets like Immersed senses and others mentioned in the article are designed to provide you with it. 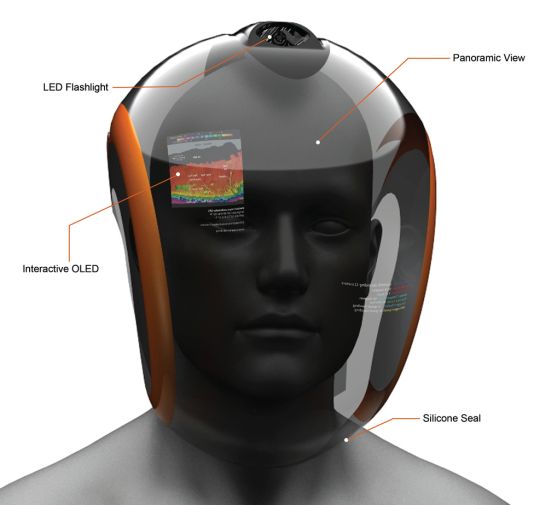 Improving the limitations of current scuba diving system, designer Adam Wendel has come up with a futuristic device named the “Immersed Senses” that changes the way the diver sees, hears, and breathes underwater, allowing them to become a part of their surrounding environment. Immersed Senses is the future of underwater diving and exploration. Featuring a LED flashlight to let the diver to observe the dark depths of the ocean, the mask also includes a large OLED glass display to offer a panoramic view of the surroundings. The OLED enclosed helmet also allows the extracted oxygen to flow freely throughout the helmet, as if you are breathing on land without any breathing apparatus.

While an interactive OLED display gives access to underwater GPS maps, therefore allowing the diver to navigate efficiently throughout the ocean’s landscapes. The OLED also offers software that can identify all species of fish, coral and other ocean dwelling creatures that diver is currently viewing. With Immersed Senses, experiencing the underwater world is now fully interactive. In addition, the OLED screen depicts important info such as oxygen toxicity, nitrogen levels and even body heat to keep the diver well informed and safe.

Made in haptic glass, the device concept touts futuristic technology to the core. An optically clear glass with microscopic pours keeps water molecules out, yet it allows sound waves to pass through. Sound travels six times faster underwater than on land, however it is nearly impossible to interpret where the sound is coming from. The haptic glass interprets the sound wave orientation then displays the source and direction on the OLED display.

Water leakage is eliminated with the use of a silicone lining that seals the helmet to the skin. The silicone’s flexibility affords the diver to explore with comfortable movements. The orange side panels assist in internal circulation of the extracted oxygen. The rear of the helmet contains an electrolysis reactor that extracts oxygen from saltwater. The breathable oxygen is circulated throughout the helmet, creating a revolutionary underwater breathing experience.

How does it work?

Immersed Senses operates by a battery that utilizes a centrifuge mechanism to pull oxygen from seawater that begins the electrolysis reaction. Saltwater is extracted into the bottom reservoir that reacts with hydrogen gas. The saltwater is then charged by a positive and negative anode/cathode that generates breathable oxygen. Two internal devices help to circulate the oxygen to the diver’s mouth and nose.

The diver then breathes in the oxygen and out carbon dioxide, which exits the helmet. The battery and stored hydrogen can keep a diver submersed for up to 8 hours. The Immersed Senses revolutionizes how a human can breathe underwater, as well as interact with the OLED display offering a panoramic view of the deep sea. 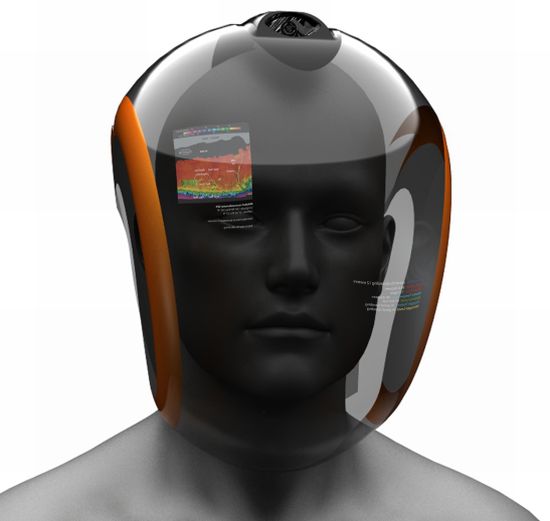 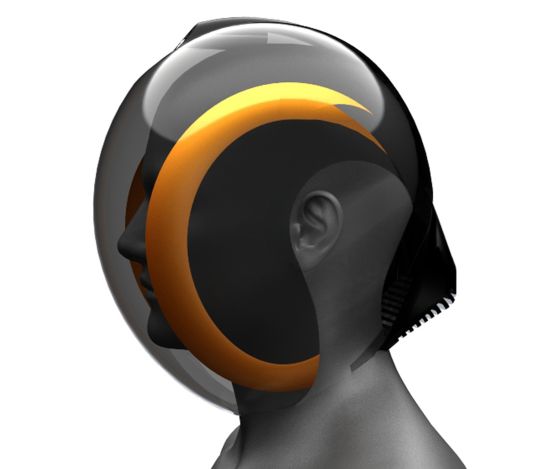 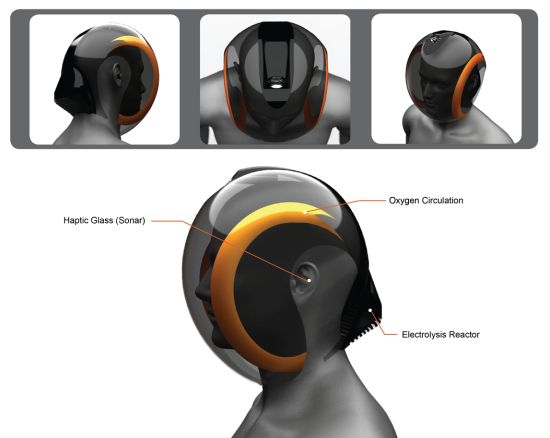 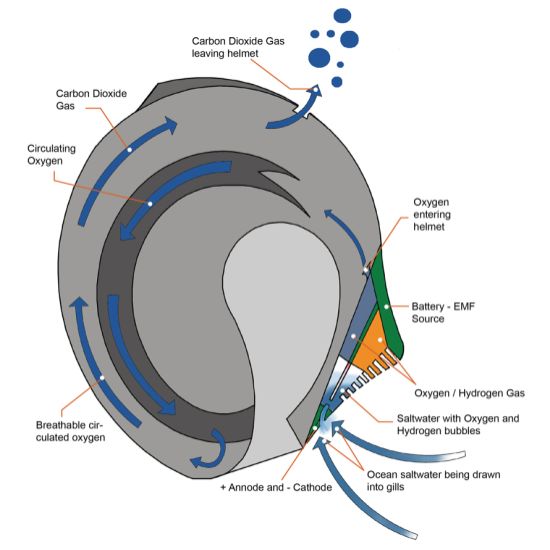 Some more gadgets for underwater adventures 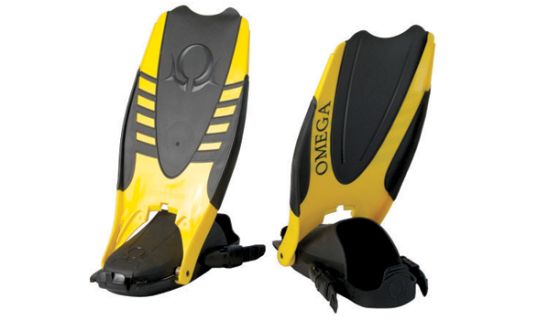 So, you love diving underwater but soon get tired of floating in that horizontal position. What’s the way out? You could choose to just sink to the bottom and walk upright. The only problem then would be those stupid fins. Jokes apart, every diver would agree that fins – as necessary they may be underwater – make it terribly hard to walk (for instance while climbing boat ladders). The way out is the award-winning Amphibian Dynamic Scuba Fin.

Designed by Designcraft and bronze winner at IDEA 2008, the Amphibian Dynamic Scuba Fin obliterates the need to drag stupid fins around. A handy mechanism on each fin is activated with the opposite heel and it readily transforms the fin into a shoe. The blade of the fin goes vertical and comes to rest against the diver’s fin. When someone wades into the water, the opposite happens as water resistance opens up the fins in a matter of few kicks. Jump for more images of the Amphibian Dynamic Scuba Fin – say goodbye to those horrible duck feet.

2. OceanComm: An apt way to communicate when underwater 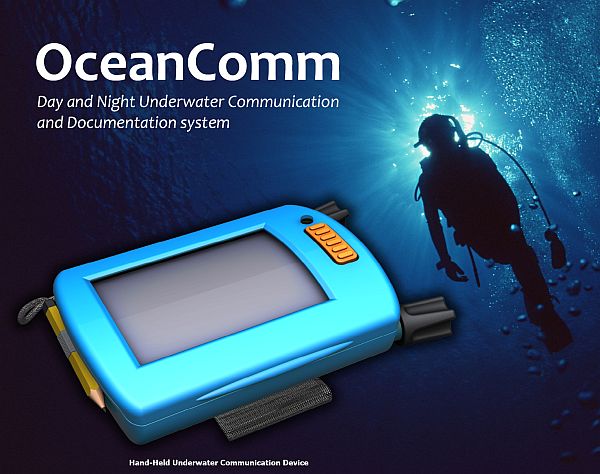 One major problem that divers all around the globe face is their incapability to communicate with fellow divers when under the sea. The most common way to deliver a message when underwater is the use of signs or signals. But at times these gestures can hardly deliver a complete message, so a device which will clearly inform fellow divers about their experiences or activities is essential. Christened OceanComm, a Day and Night Underwater Communication and Documentation system, it has been designed by Jaehun Gu.

A handheld underwater communication device, OceanComm needs to meet a few specifications in order to get accepted widely. The device should work perfectly in both fresh as well as salt water. The brightness should be adjustable and should not in any case become a hindrance during night diving. It should not pierce through the diver’s eyes.

The device should be crafted in such a manner that both left and right handed people can use it without any hitch that too over a wide age group. OceanComm should be easy on pocket and in any case the price range should fall in the $50 to $100 range. It should work in a perfect condition at temperatures ranging from 32-100 degree Fahrenheit and a depth of 40 meter.

OceanComm can be charged easily with the help an everyday cell phone charger or USB port. So, if you love water adventure sports and are an active diver, OceanComm will make sure that communicating with others never takes a backseat. 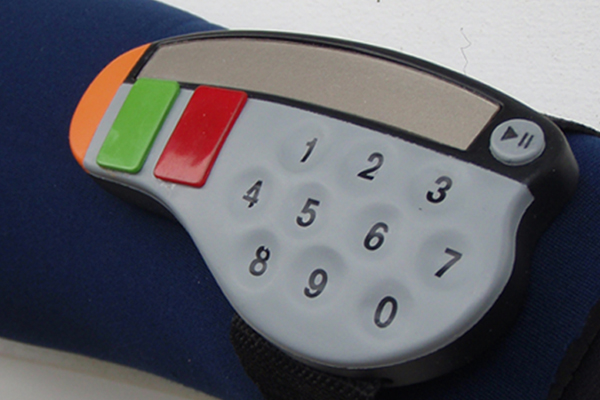 Underwater divers face problems communicating from below the surface of water. They make use of gestures, which can be misread many times. This may lead to some serious problems in case of an emergency. Keeping all these factors in mind, Nichola Trudgen has designed the Subcom underwater radio.

The device has been specially designed for Marine Biologists for Tait Radio Communications. It comes draped in easy-to-use technology that has been clubbed with attractive features. Subcom Radio is strapped around the wrist before the diver goes underwater. If someone sends a message, he will be informed with a vibration. The communication gadget will ingeniously exploit text and voice recognition technology. A message will flash on the widescreen that the diver will be able to read clearly. The gadget has Yes or No buttons plus digits from 0-9, which the diver can use to send a response.

The underwater radio communication gadget is light in weight and comes wrapped with latest features. Subcom is an ingenious device that has made technology dive in water as well.