Nowadays, most of the architects focus on utility more than design. This leads to a city landscape full of tall and bland structures. However, among all these bland structures, only a few stand out. They do not only because they are tall, but because of their amazing design. The mixed-use office building would be one such structure. Although not tall, due to its mind-boggling design it would automatically catch the eye of the viewer. In fact, all the 15 innovative building designs mentioned in this article have an amazingly unique design. 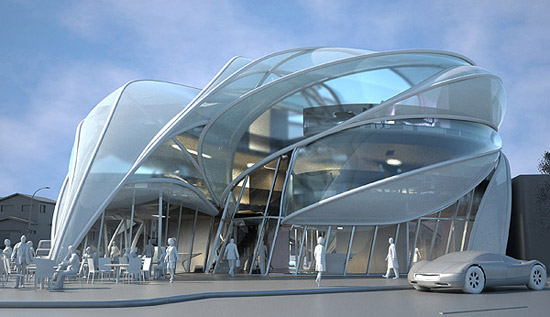 Los Angeles’ position as one of the premier US gateways to trade and commerce makes it rightfully entitled to a vital urban environment. American B+U Architects have developed a proposal for the establishment of a mixed-use office building to enhance its status as a premier quality city.

The sustainable design envisions a three-leveled building which would include a cafe and retail space at the ground level with the second and third level dedicated to open office spaces. The office space is configured around a central foyer which forms the entrance. Moreover, the unusually designed building has been enveloped in a high-tech fabric enclosure system with different degrees of transparency and opacity to allow sufficient daylight in during the day. 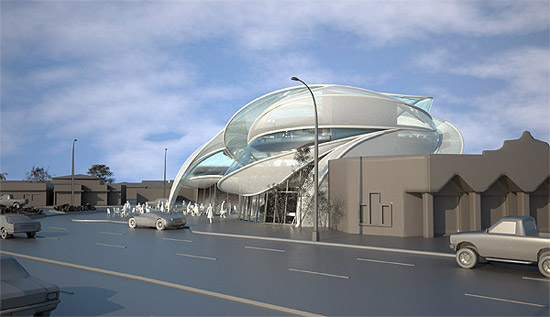 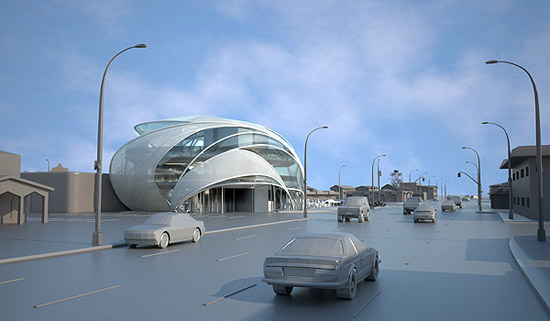 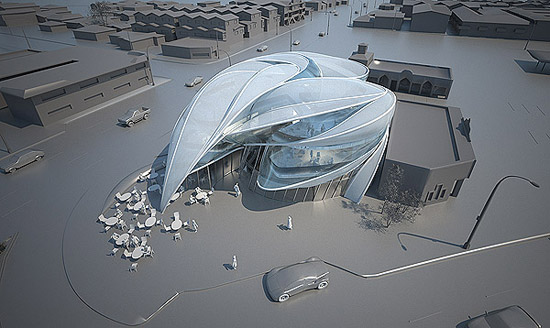 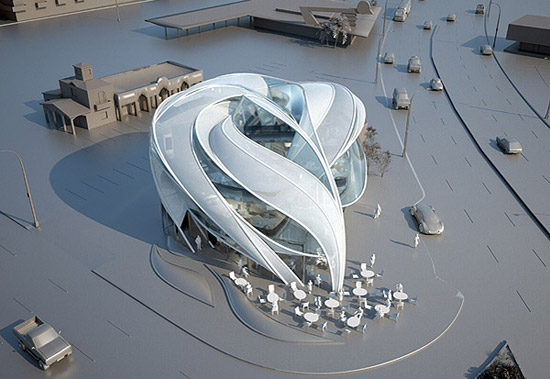 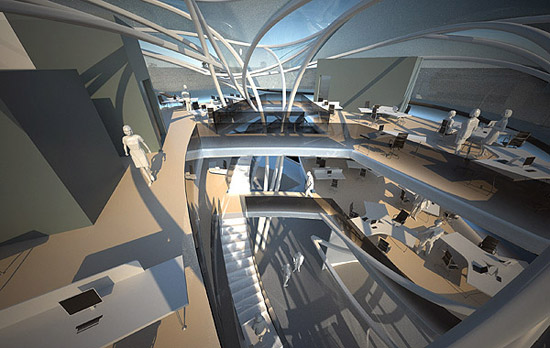 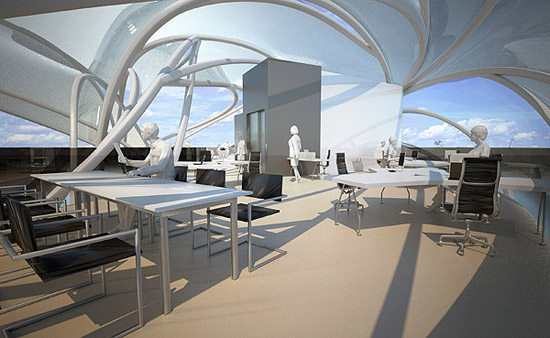 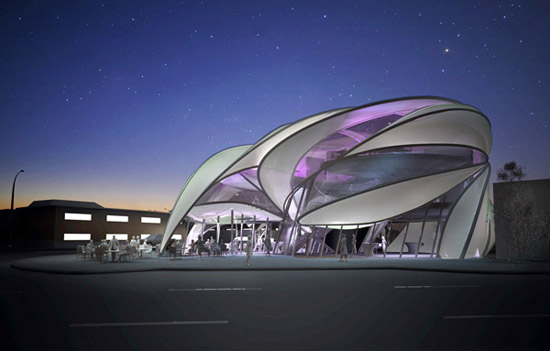 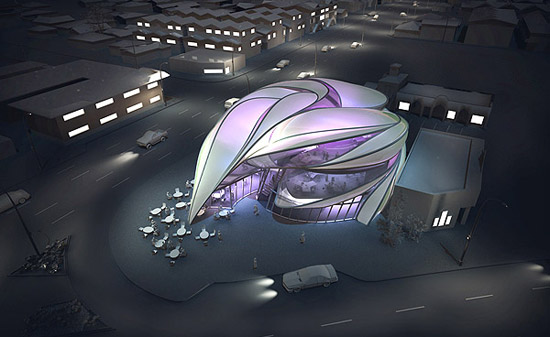 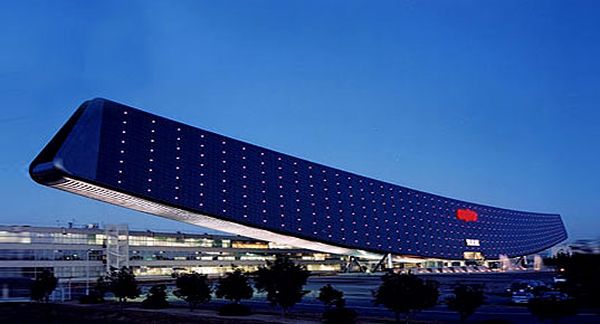 Located in Gifu, Japan, the Solar Ark by Sanyo is a unique building that is capable of generating 630Kw of solar energy, thanks to 5,000 solar panels fitted over it. Interestingly, the building came into being following a big mistake made by the company, as they used substandard monocrystalline cells during the construction. Furthermore, instead of throwing them away, the company decided to use them in the new building. Moreover, inside the building, there is a solar museum, solar lab and rooms where environmental events take place. 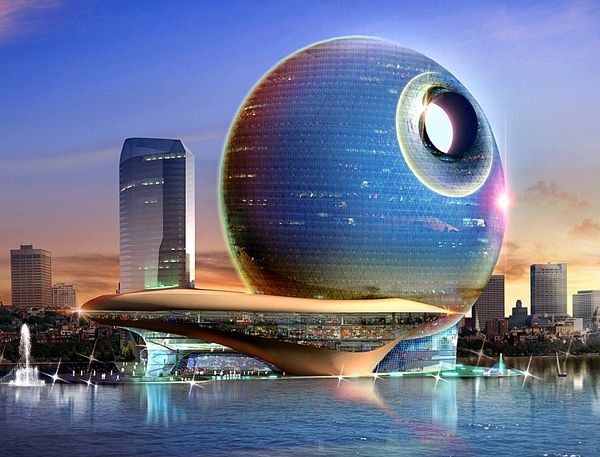 Created in UAE, this convention and exhibition center at Ras Al Khaimah resembles a death star. Featuring a nest made out of steel and spherical glass, the building rises slightly off the ground, giving it an unusual look. In addition, the Death Star comprises a number of hotel rooms, convention center and office space with the giant sphere. 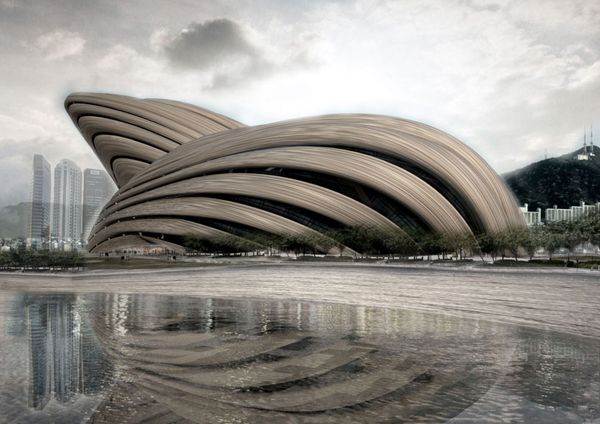 Formed like a seashell and right on the edge of the sea, the Busan Opera House hosts various cultural activities, ranging from operas to musical events. The main auditorium has flexible seating and stage locations, along with rotating platforms, offering adequate space for both small as well as large-scale cultural events. Moreover, there is also perimeter seating and same direction seating orientation to provide different viewing perspectives to the viewers. 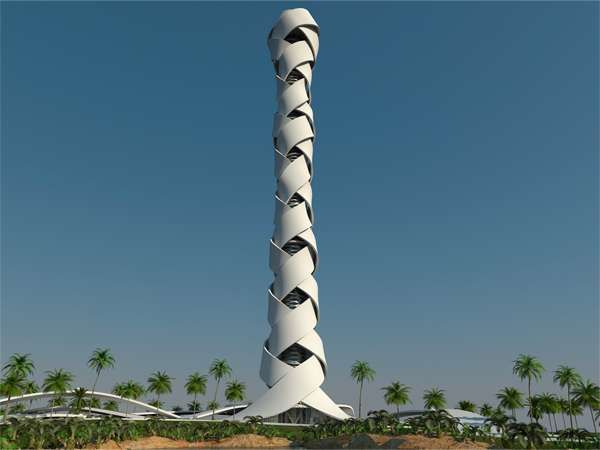 Situated in Dubai, the Woven Tower looks like a date palm tree with twining maze. The ground level is created as an open structure to depict the hospitality of people of Dubai. It also presents various shopping options on different levels to the visitors. 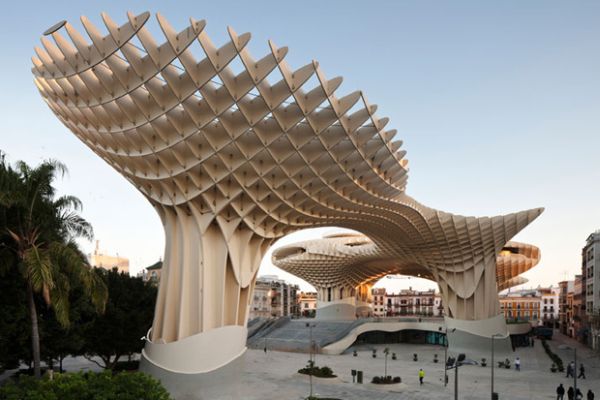 Built in Spain, it is one of the largest as well as novel timber constructions in the world. Metropol Parasol is a massive construction that houses an archaeological museum, elevate terrace that extends the plaza and a farmer’s market, all within the building, and works as a full-fledged city center.

This design is a playful and innovative take on the crowded streets of New York where a residential tower is a pipe-dream with shortage of space . It is described as a “luxury residential tower in a culture of congestion” by the designer. In addition, the design is well suited to rise high and contort to one side to take up as less space as possible. 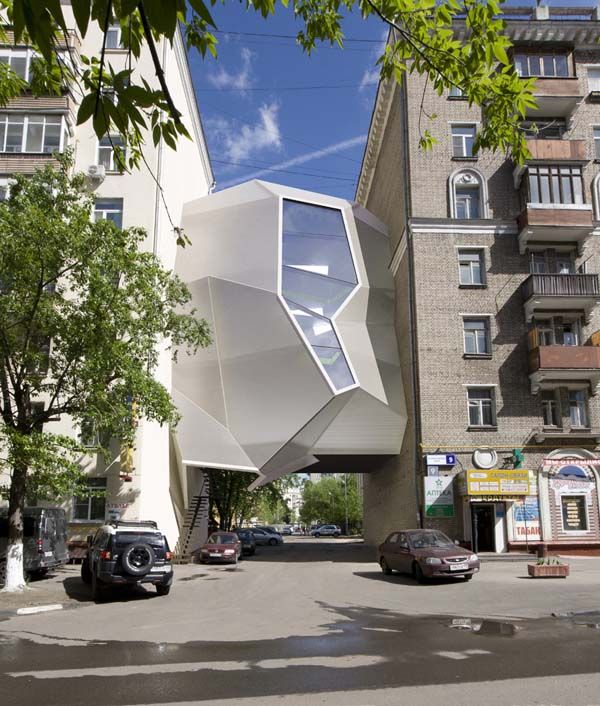 This organically shaped building in Moscow is a perfect way to use up all the extra space wasted in alleyways between two buildings . It is designed by Russian architects Za Bor Architects. It is a hanging design that is innovative and pleasing to the eye. 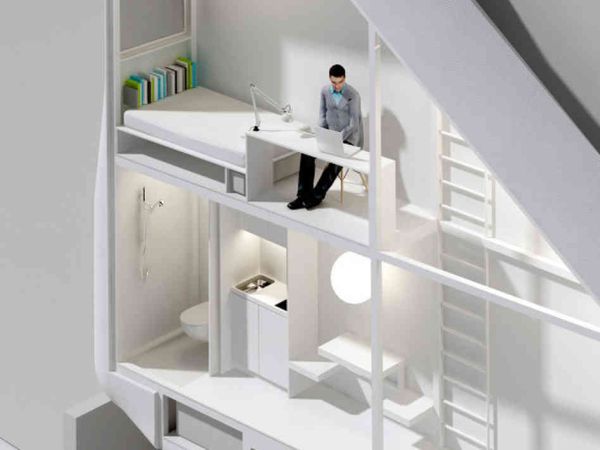 Centrala’s super-slender building is not for people suffering from claustrophobia. This design in Warsaw is to use up space between two buildings. It cannot hold too many people at once but we love it for the futuristic design of this building and how easily it uses up all that extra space. It was designed by Polish architect Jakub Szczesny. 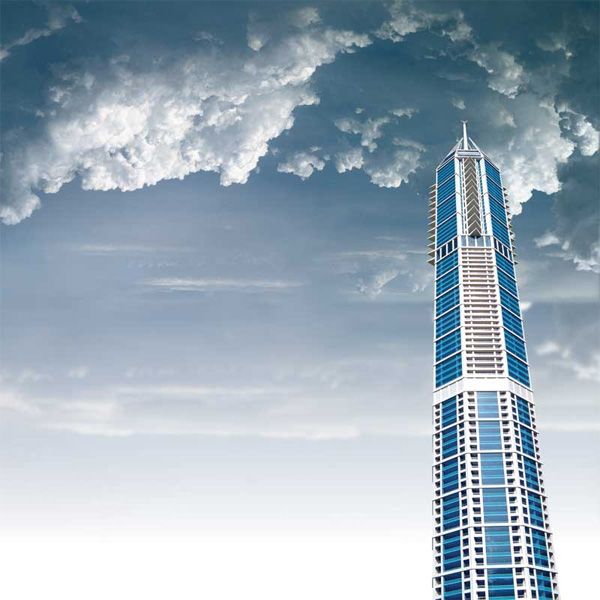 This 90 storey building in Dubai is the tallest residential tower in Dubai and overlooks the Palm and the Gulf. We love the luxury attached to this building with its well equipped private elevators in each duplex and 57 swimming pools in the entire building. 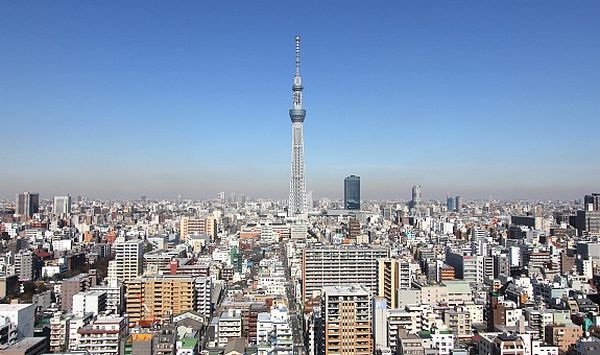 This architectural beauty is a broadcasting , observation tower as well as a restaurant in Tokyo, Japan. The beautiful lights used to illuminate the tower everyday, alternating between patterns of Iki sky blue and Miyabi purple is a sight to look out for at night. 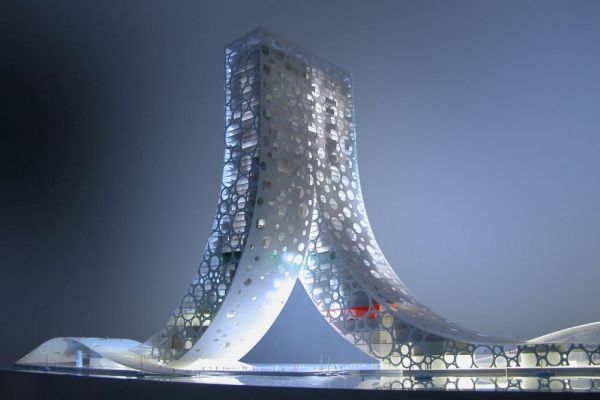 The Ren Building located in Shanghai, China is one of the most exclusive examples of human imagination and creativity. The entire structure is composed of two distinct buildings – one, emerging from water and the other from land. The two buildings then combine into a grand hotel with about 1000 rooms for lodging and stay facilities. The building structure was first proposed at the World Expo 2010 held in Shanghai and is designed by PLOT. In addition, the design of the building is such that it resembles the Chinese words “The People”. Moreover, the waterside building is a sport and water culture center whereas the one emerging from land is used for meetings and conferences. 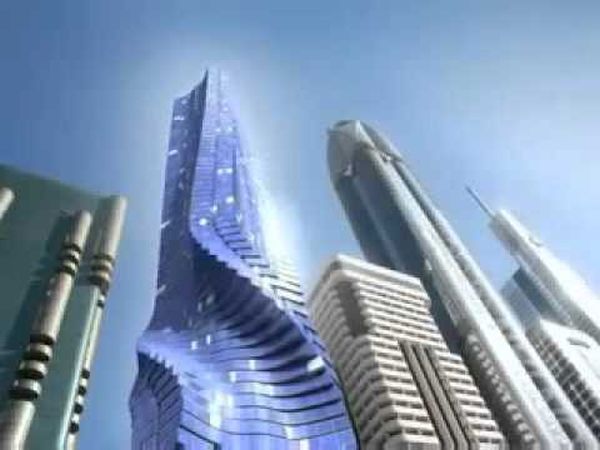 Next in the line of some odd yet outstanding building designs is the Rotating Tower of Dubai. It is located in the United Arab Emirates. It is the brainchild of architect David Fisher and is similar to that of the Suite Vollard in Brazil. This amazing structure will have about 80 floors, each of which will be able to rotate independently up to about 6 meters in a minute. Furthermore, it would have a span of 90 minutes for one complete rotation. In addition, the building is estimated to be completed within 22 months and is used for hotels, offices and residencies. In all, this structure is a sensational architectural paragon. 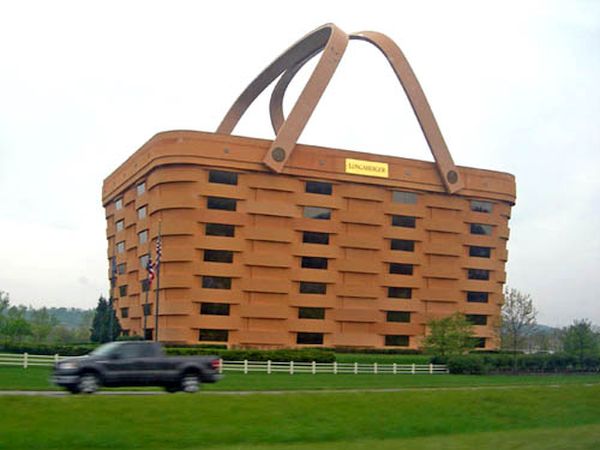 The amazing “basket building” is home to the headquarters of the Longaberger Basket Company. It belongs to the well-known basket manufacturing company in the United States of America. This 7-storey building comprises of an atrium that reaches the glass ceilings and gives you the incredible view of the basket handles over the roof. In addition, the beauty and appearance of the building is even more mesmerizing during the night.

14. The World of Coca-Cola, Atlanta 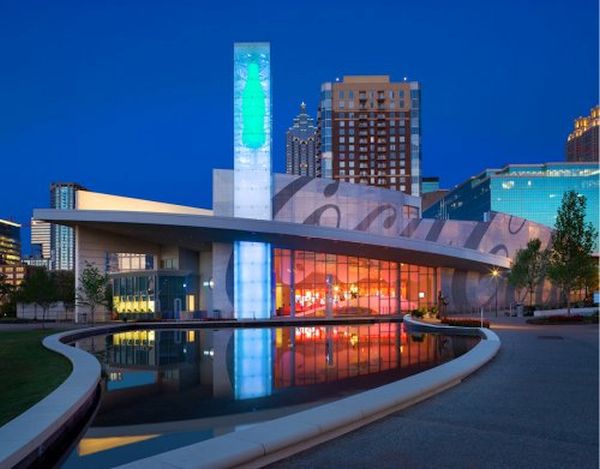 This extremely innovative building design has been dedicated to John Pemberton, the inventor of the world famous soft drink, Coca Cola. The building that resembles a Coca Cola bottle holds in itself advertising archives, tasting center and an interactive media. Furthermore, about one million visitors visit the building each year to have a sight of its design and beauty.