Winter is coming. What is the first thing that comes to your mind on hearing this? If it is snowboarding, then you are in the right place. Anyone in his/her right state of mind would either go on a vacation or would prefer having fun in the snow to watching television. Its always good to know that it isn’t just on television that you always find something new. Snowboarding too has evolved manifolds since its inception. The new snowboards and vehicles come with a variety of functions and safety features. Every year, according to the requirements of the customers, the companies keep on updating their vehicles. Omo ski-bike is one such latest innovation. Here’s all you might want to know about it. 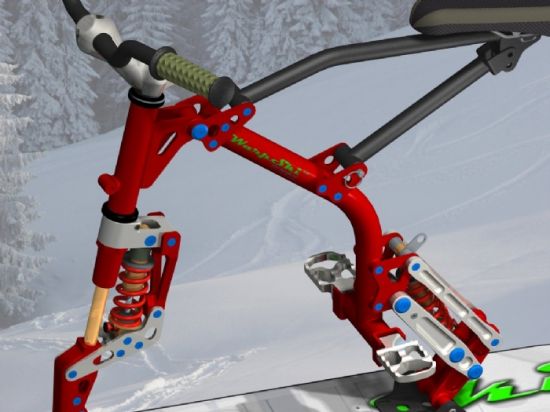 Combining the features of a snowboard and a bike, designer Mark MacMahon has come up with a hybrid BMX/snowboard snow bike that you may ride like a bicycle on the snow-clad slopes. Entitled the “Omo,” the ski-bike lets the riders use their center of gravity to initiate, control turns and stopping. Comprising a snowboard and a (patent pending) frame, the Omo presents steering through the handlebars that torque the snowboard, allowing the board edges grip the snow surface. In addition, the hybrid bike collapses to a small profile that the user can transport up the hills via chairlift or in the trunk of a car with minimum fuss. 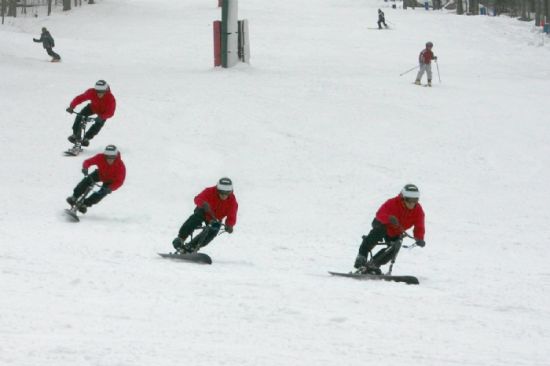 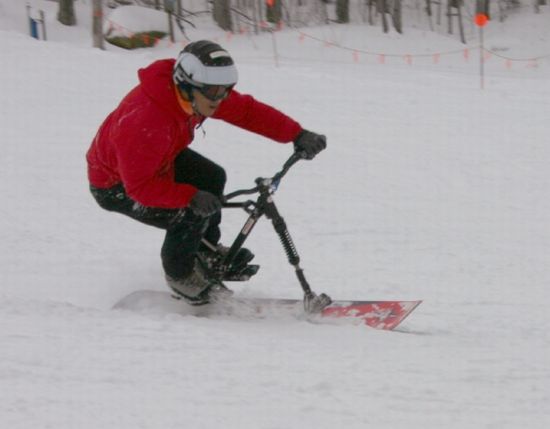 Some more snowboards and vehicles similar to Omo ski-bike 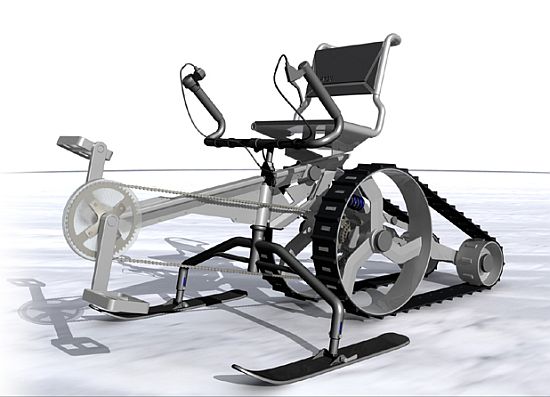 Snow is one of the most wonderful creations of nature. It spontaneously attracts visitors to hilly areas from all corners of the world. However, his unfortunately blemishes the beautiful blessing, as we run all sorts of motorized vehicles on the white turf for our petty pleasure. Addressing the issue, Italian designer Michele Marin has developed a human powered snow (HPS) vehicle. It supports clean and green tourism across panoramic country ski tracks. Finished in bent aluminum sheets to make it lightweight for easy controls weight. Moreover, the HPS Vehicle is constructed without molding technologies, which makes it completely recyclable and eco-friendly. 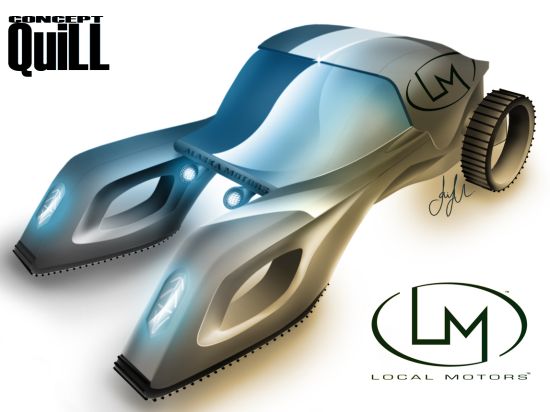 The “Quill” is developed with flowing bodylines for an aesthetic look and aerodynamic structure by British designer Halil Buzcuoglu. It is a vehicle concept that moves on both snow and land with equal efficiency. Moreover, it can accommodate two passengers one after the other comfortably on a thrilling ride. In fact, the concept vehicle features a massive windscreen to allow an enhanced front view. Furthermore, the built-in cameras provide the rear vision on the screens placed in the cockpit. Looking like an ATV, the Quill removes the steering wheel for a joystick to ensure an undisturbed front vision. The driver’s seat features a screen that allows the co-pilot to assist the pilot in navigation. The rear storage door of the vehicle is made of glass to get more light into the cockpit. 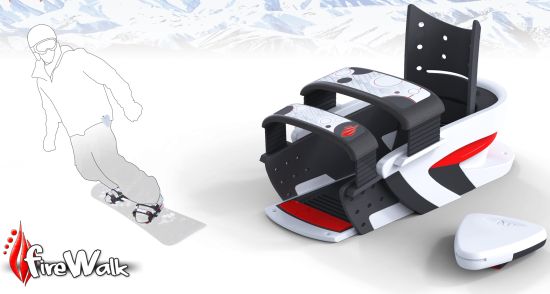 Snowboarding is an adventurous sport that requires professional training and better equipment to take on steep downhill slopes. Conceived by designer Eric Chalko, the “FireWalk” is a snowboard binding that lets the user equip for the adventure of snowboarding without struggling with the conventional straps. The remote-controlled FireWalk just needs a touch of a button to let the user step in and out of the bindings with minimum fuss. Powered by a built-in battery, the revolutionary snowboard binding removes the need to bend or grasp straps and allows easy and universal use across all demographics, ranging from the average snowboarders to the physically challenged. In short, the FireWalk presenting an ergonomic design adds comfort to the adventure sport. 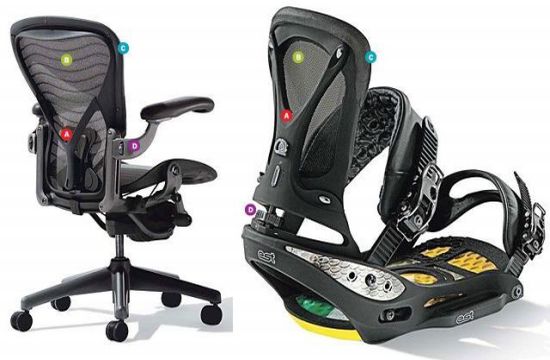 Inclusion of more scientific theories and technological adaptation has brought modern producers very close to each other. No matter which class the product belongs to, identical thought and technology behind the whole structure binds or brings them together, under the same industrial class. Similar is the case with the new bond between Aeron, producer of most famous office seat of all time, and Burton, a renowned snowboard manufacturer. Taking a cue from the famed Aeron Chair, designers at Burton has come up with a new CO2 Snowboard, which applies parallel design elements of the former. While the stiff core, finished with injection-molded thermal plastic of the CO2, is a replica of Aeron’s Y-shape back design, the other signature webbing of Aeron allows the CO2 to reduce weight.

Burton’s CO2 Snowboard is a complete product that would retail for $390 from next year onwards.

Incorporating kinetics in ergonomics and high performance in space-age materials, the CO2 Snowboard allows flexibility to the rider so they could easily bend knees and adjust the angle of the forward lean, which helps in generating high speed even in sharp curves. 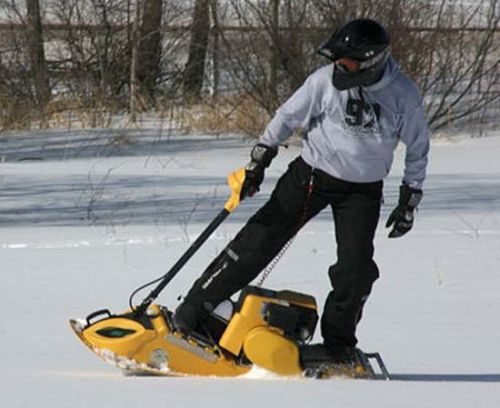 If snowboarding on your traditional boards doesn’t excite you anymore, designers at Mattrax have created a motorized snowboard named “Mattracks Powerboard”. It takes the adventure of snowboarding to new heights. This vehicle generates power from a 200cc petrol engine molded in high-density plastic, to reach a top speed of 18 mph. Moreover, the powered snowboard features the chassis finished in aluminum. It not only gives it strength but also makes it lightweight for ease of use. Integrating an adjustable handle for leverage and stability, other than providing the mounting point for the thumb-operated throttle, the powerboard steers like a traditional snowboard that users can control by shifting their body weight with ease. 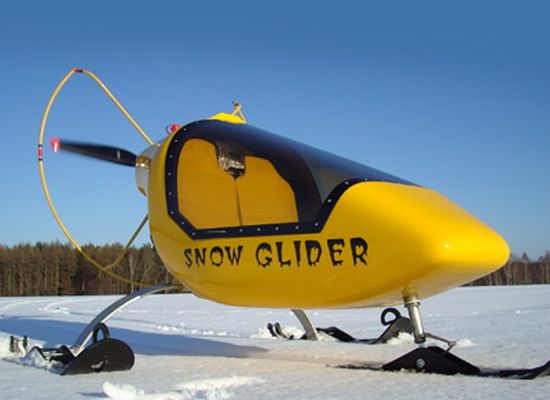 Drawing inspiration from the custom-made sleds used by Russian soldiers during WWII, the “Snow Glider” by Czech Republican designer Václav Zahrádka is an innovative vehicle that replaces the wheels with a propeller and skis to glide you safely through large, open expanses of snow and ice. Looking like a personal chopper, the sled features the aircraft cockpit-like cabin and a huge propeller at the rear for a secure yet brisk movement in snowy lands. Made in lightweight materials like fiberglass and aluminum to climb hills as steep as 30 degrees, the vehicle generates power from a 40 horsepower snowmobile engine to reach a top speed of 75 mph. Controlled by a foot bar that directs the single front ski, the snow vehicle operates throttle and braking with separate hand levers. Ideal for arctic condtions, the Snow Glider makes life mobile and a bit more comfortable in freezing zones. 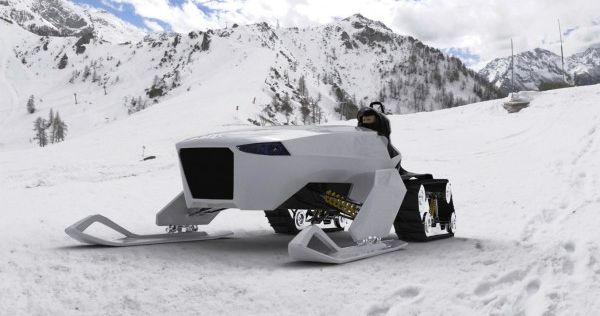 Vehicles pumped with gasoline add harmful gases to the atmosphere. This is drastically changing the environment and posing a threat to both mankind as well as animals. Keeping the ever-deteriorating surroundings in mind, Jessica Covi has designed Nanuq green Alpine vehicle.

The novel snow vehicle will make the rider enjoy high speeds with all the safety features intact. It comes with a mechanism that displays information digitally to make sure the driver gets all the important notifications. Nanuq has been fitted with an ergonomic seating and steering mechanisms, which provide sharp vision and comfort while driving the vehicle. GPS-systems give apt directions and easy communication in challenging terrains.

Specially designed for the European Mountain Range Alps, Nanuq ranks low on the air and noise pollution graph. With such eco-friendly properties, it will make sure that problems, like depleting ozone layer and melting glaciers, is also tackled the intelligent way.