Technological innovation have made inroads into almost all fields. Of course, the military and the army are usually the first to incorporate cutting edge technology. Apart from weaponry, there has been a lot of research into body armour that would enhance, protect and sustain the futuristic soldier. Body armour suits of the future for the military consist of lightweight but extremely strong materials, having integrated sensors and wearable computers that are meant to resist enemy attacks. These body suits of the future would help the soldier to survive intense battle, and may help to save the lives of wounded soldiers. Take a look at some military body armour suits of the future:

This idea might be straight out of sci-fi movies. Liquid armour would be extremely lightweight but it would be as effective as the armour suits used currently. Body armour suits are usually quite heavy and can weigh up to 30-40 pounds, but suits made from liquid metal would weigh just a fraction of that. It is also supposed to give complete protection and the technology used to develop these lightweight body armour suits for the military in the future, is quite intriguing.

One of the liquid compounds that are in the process of being developed is made by submerging iron particles in silicon oil to prevent rusting. A current activates the armour, which aligns the iron particles layer by layer, thus creating a shield that is hard and strong. 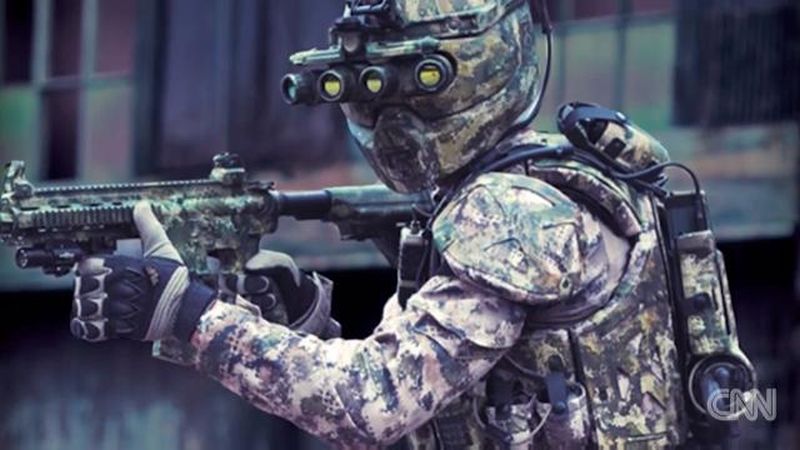 TALOS stands for Tactial Assault Light Operator Suit and this US Army program is supposed to enhance the liquid armour to a greater degree. The TALOS certainly seems to be one of the body armour suits of the future for the military. It would have high protection and 3 major components – technological integration, exoskeleton and liquid armour.  A body armour suit such as this one would definitely qualify as a super suit for the super soldier. It would not weigh down the soldier, and provide him with three layers of protection. The suit would be accompanied by a tech integrated helmet and leg reinforcements. GPS and other communication systems would enable the soldier’s superior officer to know his status, including location and physical stats such as blood pressure, heart rate and oxygen level. 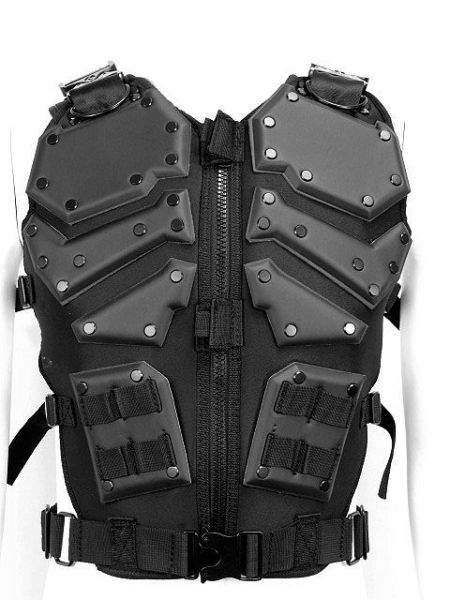 A special site has been set up by the United States Army, which has a hi-tech laboratory aimed to identify and integrate gear, weapons and equipments that would reduce the massive loads that each soldier carries with him on his missions. Called the Win site, scientists at this lab hope to reduce the weight of the soldier’s burden by at least 72 pounds. Lightweight body armour suits for the military in the future are being developed from extremely strong but lightweight fabric using innovative emerging technologies such as 3D printing. The laboratory uses 3D laser scanners, mannequins, 3D printers and computer graphic models to generate prototypes of body armour, helmets, radios, night vision, batteries and weapons to assess the best integration of technologies. Biometric sensors are expected to be included in the military body armour suits of the future. 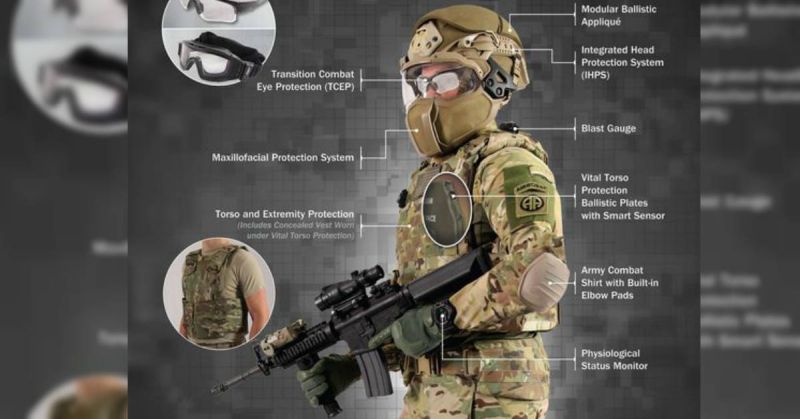 Another body armour being developed is the TEP. The Outer Tactical Vest that is being used by soldiers today weighs about 26 pounds, whereas the TEP would weigh at least 5 pounds less and have a much higher degree of scalability. This would give commanders the flexibility to choose between full body armour or this vest, depending on the mission and threat level. TEP would also be accompanied by Pelvic Protection, Scalable Vest and Combat Shirt (made from breathable fabric), aimed at comfort and security. The special helmets would have night vision goggles, complete face protection including an LCD screen which would adhere to the night vision goggles and could be transformed into sunglasses (in a second or less),  by pressing a button.

Body armour suits of the future for the military are being designed by integrating many emerging technologies to reduce the load of the soldiers and to protect them in battle. These super suits are also intended to save the lives of wounded soldiers, as well as to provide greater comfort and manoeuvrability to them.