As students or more specifically science students who have to spend most of their lives brandishing a stick with equally spaced marks may have a cause for rejoicing as the instructions of the math teacher that have to be followed using the stick, also known more popularly as the ruler, can be completed in a more fun manner as the design which has remained almost unchanged ever since it was first made before the birth of Christ has undergone a terrific mutation. The new avatar has been christened as Glassified and is probably going to be one of the best things that ever happened to middle school geometry. 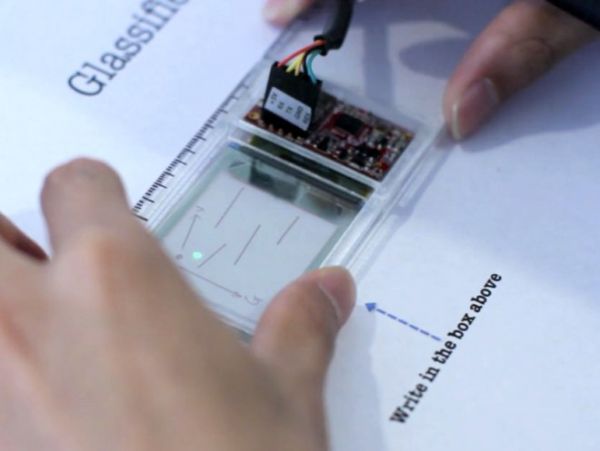 Glassified has been created with the intention of etching a new benchmark based on which the utility of other rulers can be compared. At first glance it may seem as harmless as any other ruler with its clear plastic body and black scratches on its edges marking lengths. But scan the body and your eyes and intellect is arrested upon reaching a tiny microprocessor and an OLED screen. It is thus a translucent display screen fitted on a traditional plastic ruler. And here is how it is never going to stay the same.

For those wishing to learn and visualise the effects of Newtonian laws and gravity, this ruler helps you in ways you can scarcely imagine. Draw a line at an angle to the horizontal and place the display screen on the line. A small simulation of a ball will roll down the line based on its inclination. In fact, the steeper the line is, the greater will be the speed of the ball in keeping with the physical laws of gravity. You can draw a series of lines above or below each other and watch how a ball will behave when rolled along the topmost one.

Then you can draw a polygon and inside the polygon, indicate the direction and velocity of the animated ball by an arrow. As soon as you place the display on the polygon, the ball will appear and you can then see the trajectory of the ball as it bounces inside the polygon. If on the other hand, you wish to perform measurements, there is a mode that can help you calculate the area or the perimeter of the polygon by a deft push of a button.Combine all of the functions in complex ways and see your geometric shapes come alive.