Striking a balance between speed and sustainability, there’s no transportation medium as revolutionary as the bicycle. It’s a delight both for the health-conscious and the eco-friendly. Although the first bicycles came as early as in 19th Century, they have undergone plenty of changes. Modern urban bikes, despite having almost the same design, are nothing quite like their predecessors. They are hybrid, super portable and also looks stunning. Let us take a look at Hybrid city bike and other unbelievable urban bicycles that are bringing a change for good. 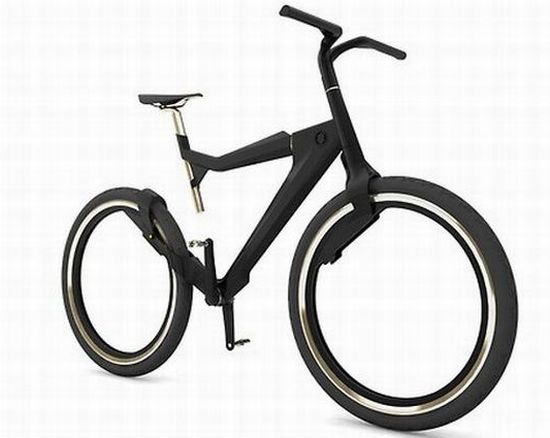 Breaking away from traditional bicycles, Italian designer Peter Dudas has come up with a hybrid bike that presents a simple, but at the same time exotic, design to stimulate your imagination. Amalgamating the latest bicycle materials with high technology, the minimalist bike is primarily finished in carbon. Apart from making it flexible and durable, it also reduces the way for easy controls. Running on hubless wheels, the city bike removes the transmission chain for a clean, elegant and sporty design. Featuring a saddle and handlebar made in aluminum, coated with carbon, the bike hides the gear and break cables in the frame with a system of gear wheels. Ideal for inter city commuting, the hybrid bike just meets all the needs of trendy bikers. 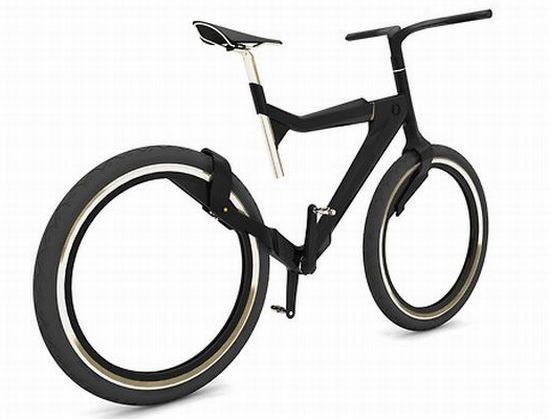 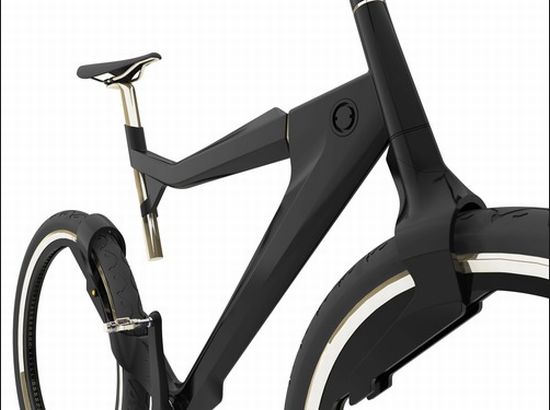 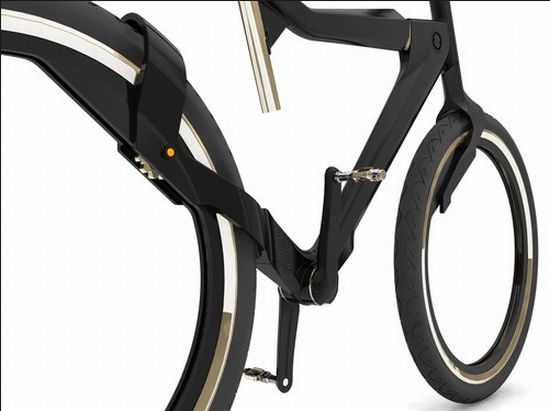 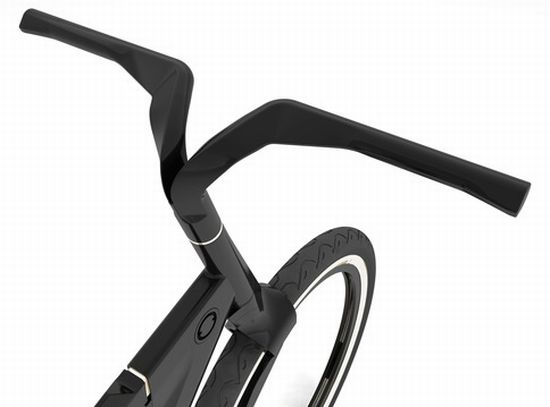 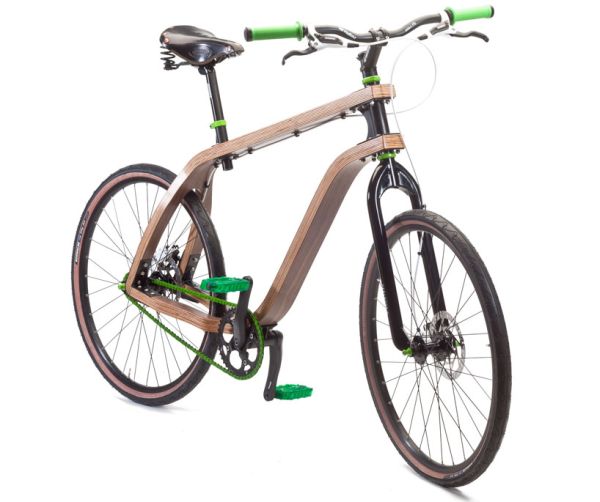 Green and eco friendly are the two words Warsaw based designer Stanislaw Ploski seems to have kept in mind while crafting “Bonobo,” his plywood bent cycle. Of course, it is a completely fresh and new idea, seeing the fact that he presented the prototype at DMY Berlin 2011. Not only was his bike liked a lot, it was appreciated for the sheer message it sent across.

Combining a light weight wooden frame, the bike has solely been designed for avid bike riders. Not only does the rider get complete control of the vehicle, he/she can even expect a smooth ride all the way. With lines crisscrossing its frame, the bike looks ready to kill. Presenting an eye appealing design, it gives out a feeling of utmost security to the onlooker.

The sturdiness of the bike is commendable, seeing the material with which it has been crafted. Designed for complete comfort and utility, the bike is here to stay. Being a low maintenance bike, the Bonobo comes equipped with a single gear drivetrain and very reliable set of hydraulic disc brakes for rocky terrains. Being a rider, having a complete grip over the bike is a necessity.

Just a good to know fact, one can swap the breakes for an internal gear hub or a belt drivetrain. Sensing so many ultimate, eye popping features has certainly made me drool all over the design itself. Go grab your version of the bike today, and fix it with the coolest possible gadgets available. 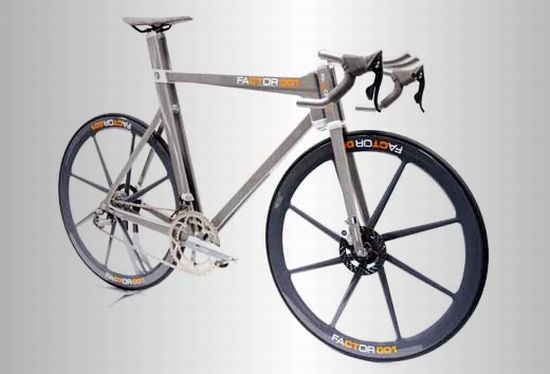 The Factor 001 is a bike epitomizing the latest in technology. There’s another thing that it epitomizes – over the freakin’ rooftop pricing! But the plus side first. BERU has been boasting of a super-bike for a while now. And it seems that Factor 001 would indeed see the light of the day; as a matter of fact, as early as the next week at the launch of the U.K. Science Museum’s free exhibition “Fast Forward: 20 ways F1 is changing our world.”

The Factor 001 consists of waste materials from F1 cars. Furthermore, it comes with GPS, radio transmitter, motorsport-grade sensors, all reporting to an on-board computer. Even with all that gadgetry, the bike is very lightweight, weighing less than 7kg. The Factor 001 has sensors incorporated in its carbon frame that take the ergonometric, biometric, physical force and environmental data and use it to analyze rider’s performance. All the “world’s first(s)” come at a price though, 20,000 GBP to be precise. It remains to be seen just how many buyers Factor 001 can muster at that price tag. Not many, I’d suppose. 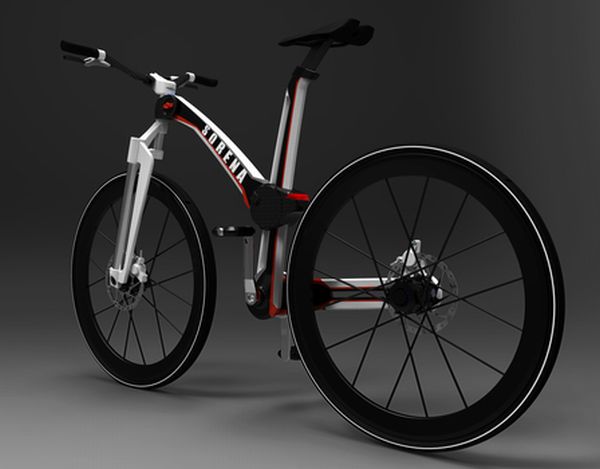 With shrinking parking spaces in the cities, even a lowly bike needs a design upgrade to remain attractive as the commute of choice in the urban setup. Iranian industrialist Mahdi Momeni looks for remedy by presenting his award-winning SORENA Foldable Urban Bike.

The design of SORENA Foldable primarily aims at reducing the size of the bicycle by more than half in order to allow users to carry it around with them at an ease and comfort that would not be possible to do with its traditional counterpart. With it, the users can have the option of not only carrying their bikes around with them wherever they go (office, park, cafes, school, etc.) but also can park (or store) their transportation fittingly in lesser space.

This extraordinary ergonomic bike comes in two configurations that allow both male and female users to customize its size according to their own height and personal ease. To fold the bike, the users have to simply tuck in the handlebar, unlock the two red lock levers on the headset and lift up the sliding joint. They then have to simply roll the top tube out of the body from the joint and rotate frame to get the front wheel to fold back to the rear wheel and fasten the two red levers together to secure the two wheels in place.

This sleek mechanism allows the 160 cm bike (it can be reduced to a 155 cm configuration for people of smaller stature) to fold down to 85 cm which is almost half of its original size making it the perfect mode of transport for a city dweller. 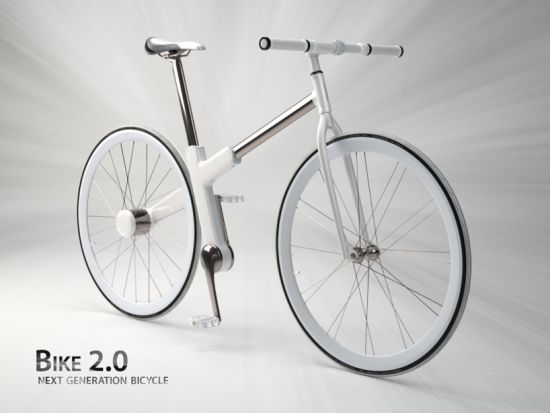 And the winner for the Seoul Cycle Design Competition 2010 is Bike 2.0 by designer Nils Sveje. Nicely formed and rendered, the next generation bike has been designed to provide all the extra energy boosts which the biker needs while cruising around. Framed in aluminum, the bicycle design aims at intelligent energy usage with an in-wheel 500-watt brushless motor and in-crank generator for all electricity transmission, hence giving a boot to the oily chain mechanism notorious for soiling hands and clothes.

The adjustable frame of the bike can be fitted according to different riders’ needs. The bike features an automatic stepless gear box to control pedaling speed and also pedal break by turning the pedals backward to store energy. The handlebar is equipped with two wireless rings to set how much you use or charge the battery. 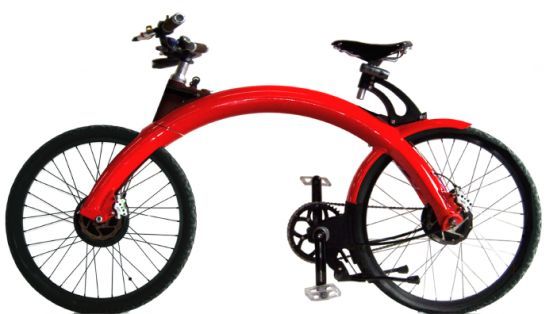 Coming from the house of PiMobility, the “PiCycle” is an eco-bike with a hybrid propulsion system that when required becomes a moped/scooter, thanks to the built-in electric motor. Featuring a human electric hybrid plug-in operating system, the PiCycle harnesses the human power, used to pedal or run the bike, to charge the on-board lithium-ion battery in a sustainable manner. The bike also integrates a Shimano semi-automatic 8-speed transmission to ride up hills with ease and reach the top speed of 20 mph, with a range of 20 miles, on flat tracks. The patented monocoque arch frame of the PiCycle not just allows a trendy design but provides a stable and cool environment for the battery pack as well.

Presenting trailing-link suspension fork with elastomeric compression, the hybrid bike makes use of hydraulic disc brakes (front 8-inch and rear 6-inch), while the rider can adjust the height of the seat between 5’4″ and 6’2″ according to his or her height or comfort.